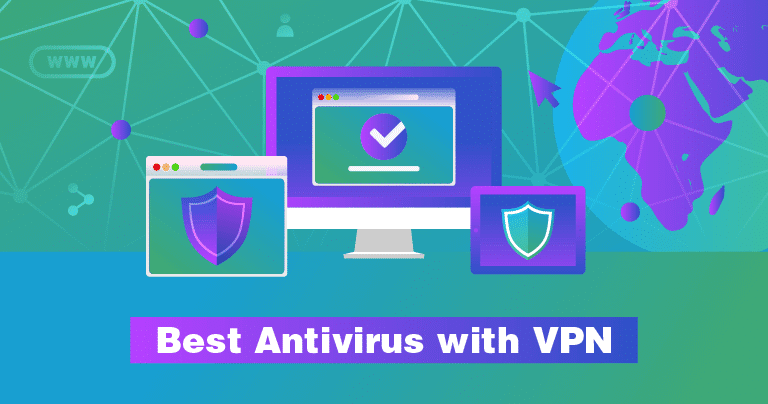 Antivirus programs are meant to keep your computer safe from various malware and viruses. However, using an antivirus alone will not protect you from internet dangers or surveillance, so it is also necessary to use a VPN. A VPN cloaks your IP address and encrypts your data traffic, increasing online safety by hiding it.

Best Antivirus With a VPN

Many antivirus programs include a VPN function, but they're worth trying. Here's a look at the five best antiviruses available with a VPN and as an excellent way to improve your online security and privacy. Read about them and pick one that best suits your needs.

Norton 360 is a security program that protects your computing equipment from being hacked. Norton Secure VPN, a distinct VPN run by the firm, provides excellent protection to users.

Norton Secure VPN supports various devices and can be used on Android, iOS, macOS, and Windows systems. The data is encrypted with strong AES-256 encryption and OpenVPN tunneling technology.

The app also promises to improve your online security and privacy, as well as live up to the hype. It employs several security and privacy-enhancing techniques, among other things. It has a kill switch and split tunneling functions that you may use to enhance your cybersecurity. The VPN is presently only accessible on Android and Windows devices.

Some of the features that Norton Secure VPN offers include:

Aside from that, the VPN masks your IP address and prevents IP and DNS leaks. It comprises servers in Brazil, Singapore, the United Kingdom, and the United States. If you live near one of those locations, you will enjoy good speeds; but you'll suffer from lagging if you want to use remote servers. Users may even access material from various streaming sites thanks to the VPN. However, it's not a fantastic option for streaming because the server network is restricted.

The VPN does not support torrenting and is based in the United States. The firm has confirmed that it does not collect data in its privacy policy, but users remain cautious. However, there hasn't been a single instance in which Norton VPN has jeopardized users' security.

This VPN supports up to 10 devices and is relatively cheap. It also has a 60-day money-back guarantee.

The Bitdefender antivirus software also includes a VPN service named Bitdefender VPN. It aims to enhance online security and protection by utilizing cutting-edge technologies. It's a lightning-fast VPN with no bandwidth restrictions or sluggish surfing. Because it employs advanced security technology, this VPN is highly secure and dependable. AES-256 bit encryption and SHA-256 hashing are used to safeguard your information.

The Hydra Connect app also uses the most cutting-edge security technologies, such as Hydra Catapult, created using Hotspot Shield's technology. It is far quicker than OpenVPN and always provides you with a speedier connection. The VPN includes several complex security systems, including:

Bitdefender is a Romanian firm that is not part of the global monitoring network. So don't be concerned about your online data and behaviors being tracked or shared. It also has a no-log policy, which is excellent. The VPN does not collect or analyze your IP address or any other data that could reveal your online identity. It keeps track of your name, email address, and payment information but monitors payment methods and amounts.

Bitdefender secures your privacy and anonymity by encrypting your home network before sending it out to the internet. Bitdefender is also a safe VPN for securely watching foreign video content, downloading torrents, and surfing the web. The kill switch and split tunneling feature ensure that you receive torrents while maintaining online security. Users can now access restricted internet content thanks to routing their traffic through over 1300 servers across the world. As a result, most popular streaming sites, except Youtube, are ineffective.

Another low-cost option is McAfee Safe Connect, which gives users maximum security. It encrypts data with bank-grade security to keep it hidden from all probing eyes. Since it's the most secure encryption level, your data is encrypted on both ends, and no one can see your actual IP address or location. It protects you against government eavesdropping agencies, ISPs, and other possible intruders.

The number one advantage of this antivirus VPN is its server network. It provides servers in 22 countries and limitless bandwidth to ensure you have a fast internet connection. For speeds, it delivered an excellent pace for streaming, torrenting, and surfing when tested. Using a VPN for streaming restricted material, such as Netflix, and downloading torrents are no more difficult.

On the downside, McAfee is based in the United States and has a questionable logging policy. However, it does offer some exciting security and privacy-oriented features, such as:

The VPN works with Android, iOS, and Windows devices and provides up to five simultaneous connections on each device. You can choose between a monthly or yearly subscription plan and get your money back if you don't think it meets your requirements.

Avast SecureLine VPN is the by-product of Avast, a well-known name in the cybersecurity sector. It's a trustworthy VPN supplier owing to its robust encryption and jurisdiction. The VPN utilizes military-grade encryption, ensuring that your data is safe from prying eyes. It also includes security measures such as:

Although the features are somewhat limited, it still provides a high internet security level. THE VPN HIDES your IP address, which prevents DNS leaks and raises your online privacy levels to new heights.

The service offers over 700 servers in 34 countries a decent server network. Although the speeds are average, it depends significantly on the server you pick since it allows users to watch Netflix and Amazon Prime Video. Furthermore, the VPN allows torrenting and P2P activity, but it lacks a split tunneling function and SOCKS5 proxy.

The Czech Republic's privacy-friendly status applies. The country isn't a member of the worldwide surveillance alliance, but it maintains data logs, putting your online security at risk. The privacy policy states that the user data is retained at this point, though there hasn't been any allegation made against the VPN in which it has been accused of revealing users' data logs, which is a valid concern.

The VPN provides a free week-long trial without asking you to pay anything. You may buy it monthly using a three-year plan. The VPN also supports up to ten device connections and is compatible with Android, Apple, and Windows devices.

The bundle also includes Avira antivirus software. The Total AV, which uses Avira technology, has a premium safe browsing function to safeguard online surfing. Users may use the VPN to obtain limitless bandwidth and fast online connection speeds. It offers servers in many other countries to access foreign material with it. Its server network, on the other hand, is a pain. It has over 70 servers in nearly 30 nations. Because of its limited server network, you may slow down speeds, and connections could be delayed as a result of

The VPN provides a secure and private online experience. The connection is quick and encrypted using strong encryption and OpenVPN and IKEv2 protocols, ensuring security and speed. It also prevents DNS leaks and IP leaking, preserving your privacy. It has a lot of valuable features, such as:

Unfortunately, the VPN doesn't include features like a kill switch or split tunneling, which is a shame. The firm is located in the United Kingdom, covered by the five-eyes arrangement. Anti-privacy and data retention rules have been in place for years. Users may be concerned about their security as a result of these regulations. There has, however, not been a report of the company's name coming under scrutiny for breaching people's privacy, which is good news.

The program is simple to use and provides quick speeds, even on Android, iOS, Mac, or Windows devices. You may choose between two payment options for each six or five simultaneous device connections. After your subscription has ended, you have the option of getting a refund if you don't like the service.

Why Do You Need to Use an Antivirus Along With a VPN?

Although virtual private networks (VPNs) and antivirus software are security-enhancing tools, they have distinct purposes. Anti-malware software is an anti-malware program that protects your computer against dangerous applications and malware. For some people, using antivirus software is enough to keep them safe from viruses and secure their internet connection. This isn't accurate, though. Antivirus software won't give complete online protection to customers because it does not mask your true IP address or other web data. Here's when a VPN comes in handy.

A virtual private network (VPN) is a fantastic privacy tool that masks your real IP address and encrypts your data. As a result, a VPN makes it impossible for any nosy observer to track your online activities and thus keeps you secure on the internet. Furthermore, a virtual private network (VPN) comes with several more advanced features that increase your online security and provide additional benefits such as gaming, streaming, and torrenting.

That said, these tools are required for maintaining a high degree of protection, but because a VPN is so crucial for online privacy, you should use it in conjunction with an antivirus solution.

What Should You Do In An Antivirus With a VPN?

There are some essential things to keep in mind when choosing the best antivirus with a VPN:

Does a VPN Protect Against Viruses?

A virtual private network encrypts data traffic and masks your IP address, increasing online security and preventing attacks, hackers, and other prying eyes from seeing you. Some good VPN providers come with features that help protect you from malware. But a VPN doesn't protect you from viruses. For that, you need antivirus software.

Can a VPN and Antivirus Work Together?

A VPN and an antivirus are two different security-boosting tools. A VPN is a tool that keeps you safe and anonymous online. It encrypts your traffic and hides your IP address so that you can surf the web without anyone knowing who you are. On the other hand, an antivirus protects your device from viruses and malware. An antivirus protects from online threats and vulnerabilities, especially viruses and malware. Both are used to enhance your online security and privacy, allowing you to use them together to guarantee that your online safety is never jeopardized.

Are There Any Limitations to Using an Antivirus With a VPN?

When combining a VPN with an antivirus, you run into several limitations that most high-end VPNs do not include. The following are some of the most common issues:

Antivirus software is crucial for your device's security. With a dependable antivirus program, you can get rid of harmful malware and viruses. However, this won't guarantee total online protection since your ISP and internet hackers will be able to see what you're doing online, your IP address, and other information. As a result, you must also utilize a VPN to conceal your IP address and encrypt the data transmission. You may browse anonymously and securely in this manner. Antivirus with a VPN function is advised for both device and online security.